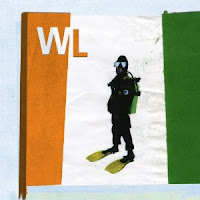 Today sees the release of the self-titled debut album by Wounded Lion on the reliably superb In The Red label. I was on the fence on whether or not to feature this album as a new release. While it's more than worthy of a recommendation, I was struggling for anything insightful to say about these dozen tracks of affable garage pop. In preparation for this review, I wound up filling two pages of my handy reporter's notebook with solipsistic nonsense. I'll spare you the details. (Who says there's no editorial standards in blogging?)
Back to matter at hand, as I debated reviewing Wounded Lion I wound up listening to it quite a bit. With each listen, it grew on me considerably and I ultimately decided that my probable lack of worthwhile exegesis should not stand in the way of alerting you, dear reader, to this fine collection of songs.
Wounded Lion are not dissimilar to fellow Californians Nodzzz in their mix of rough simplicity and unrelenting catchiness. Actually, the band(s) I was reminded of most when listening to this platter were Big Dipper and the Embarrassment. Songs like "Hunan Province" and "Belt of Orion" seem to have inherited their sense of melody directly from Bill Goffrier's old bands, sources that are both fertile and infrequently replicated. This is not to suggest that Wounded Lion are merely derivative. Rather, they simply have fine apparent taste in influences. (Others according to their Facebook and MySpace pages: The Equals, Ivor Culter, The Eyes, The Sweet and Can. No qualms there.) And I would hope that readers of this page would know that any comparison to Big Dipper or the Embos should be considered a huge compliment. One can do a lot worse than blister pop for the 21st century.
Give this one listen. You may well wind up giving it several dozen more before you grow tired of it. Also be sure to check out their highly-entertaining, shoestring-budget video for "Pony People" below. Feel free to share it with your friends. It's just as meme-worthy as Lady Gaga's latest and doesn't feature any ironic-but-compensated-for product placement.
Posted by PB at 12:17 AM

When was the last time in recent memory In the Red put out anything bad?