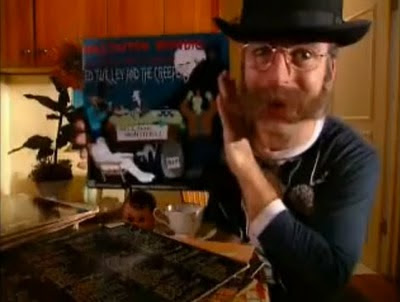 (Have fun at your monster parties this weekend.)
As I mentioned in the post for my latest podcast, the past few weeks have had a slew of noteworthy releases. The sheer quantity has meant that it's been difficult to listen to any single one enough to write a thorough review.
So how about some non-thorough reviews?
The following are a bunch of recordings released this month you might want to check out, each summarized in a single sentence. I've pulled this stunt once before, which I'm mentioning as either a way of admitting I'm repeating myself or trying to get credit, 140 character limit or not, for beating Chris Weingarten and Discographies to the punch.
I'm going to try and give each of these some more listens in near future, despite even more good stuff coming in November. (Oh, Parting Gifts and Reading Rainbow, why you gotta be so good?) When I'm going to have time to listen to each is another issue though it's probable that any of the below are a better soundtrack to the World Series than Buck and McCarver.
Idle Times s/t (HoZac)
Just when you were sick of all the lo-fi poseurs, pretenders and bandwagon jumpers, this slab comes along to remind you that feeling the heat of the flame is a lot better than licking the soot.
Belle and Sebastian Write About Love (Matador)
Missing much of the playful bounce of 2006's The Life Pursuit, B&S revert to "sad bastard" mode, which should endlessly please their core fanbase.
Fresh and Onlys Play It Strange (In The Red)
Beats Best Coast for California album of the year, sounding something like a lost collaboration between Arthur Lee and the Gun Club.
Pop. 1280 The Grid (Sacred Bones)
A nice slice of synth-laced Birthday Pary/AmRep-style gnarl that may be a sign of great things to come.
The Corin Tucker Band 1,000 Years (Kill Rock Stars)
Maria Tessa Sciarrano of Her Jazz and WPRB said of this semi-solo debut from the Sleater-Kinney singer/guitarist "I believe this is what a mommyblog would sound like, if it were in musical form," which is too on the nose to comment further.
Cheap Time Fantastic Explanations (and Similar Situations) (In the Red)
Many people whose opinions I respect greatly praised Cheap Time's debut to the heavens though I deemed it merely "good" and I suspect the same will hold true here.
The Extra Lens Undercard (Merge)
I haven't actually listened to this yet but its inclusion here allows me to score cred points by mentioning Shrimper Records and linking to this.
Links to this post
Posted by PB at 12:08 AM 8 comments

The Problem of Leisure...

What to do for pleasure?

Play the Xbox Kinect™, of course.

At this point, it's hardly considered an affront to credibility for a band to have their song in a commercial but has there ever been a more explicitly anti-consumerist song used in an advertisement than this?

I suppose it's plausible that Gang of Four thought it conceptually brilliant/deliciously ironic to match a song that poses the question above to a product which actually aims to definitively answer it. It's equally plausible that they simply couldn't pass on getting cut a check for what I assume is a substantial amount of money.

Now that they've taken this step, one has to wonder if there are other songs in the Gang of Four discography available for use in advertisements.

I Found That Axe Essence Rare?

I Can't Believe It's Not Guns Before Butter?

"I Love a Man in Uniform" for the U.S. Armed Services?
"What We All Want" for John Hancock Financial?

Armalite is still in business, right?

If McDonald's winds up using "Cheeseburger," then... well, I guess I'll go get some McDonald's. After all, they have cool songs in their commercials.
Links to this post
Posted by PB at 10:21 PM 0 comments

The Unblinking Ear Podcast: My Cup Runneth Over 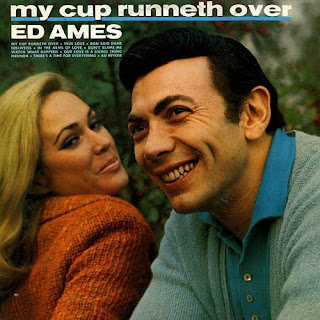 (You wouldn't believe how many images of cleavage a Google Image Search of "my cup runneth over" yields. Then again, you might.)
Though you'd never know it from my lack of posts (a fact I'll blame on the MLB playoffs), I've found myself in the enviable conundrum of having a rather large amount of new (and new to me) music grace my ears in the past few weeks. Enviable because much of it is quite good. A conundrum because its quantity means that I'm skipping around from record to record, enjoying most but giving any enough repeated spins to fully process them in a manner that would allow me to write an insightful account for presentation to you, dear reader.

Combine this with my finds from the WFMU Record Fair this past weekend (which will likely dominate my next podcast) and the records sitting on the Ikea Tullsta next to my turntable (still unplayed after weeks or months), and one can see that I'm currently residing in the land o' plenty.

So consider this podcast a cursory sampler of stuff you should give a listen. I'll admit, it's not my best "flowing" podcast but it's still probably more enjoyable than your average CMJ showcase.

The Unblinking Ear Podcast: Missing Out

No, I didn't go the the Matador 21 anniversary shows in Las Vegas last weekend (as dramatized above).

Nor did I attend the Gonerfest in Memphis the previous weekend.

It looks like there's no chance of me attending any MLB postseason games.

So what am I doing instead?

Making incredible podcasts for you to listen to.

Out of Print (Not Exactly) Digital Relics: Toiling Midgets 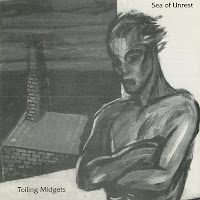 When I write "San Francisco punk," most may think of 924 Gilman St scene, ironically both a paragon of anarcho-socialist punk orthodoxy and a breeding ground for future millionaires. Despite this claim to fame, the city by the bay has never really gotten its due as one of the first in America to fully embrace punk.

Given the city's open-mindedness and tolerance of the transgressive, punk rooted in SF early and got weird fast. Locals Crime released their first records before many prominent UK acts such as the Clash and the Jam. Outsider/bizarro rock acts like Chrome and the Residents were operating pre-punk but found both new directions and new audiences thanks to the new wave. The Dead Kennedys became favorites with the hardcore crowd and the Avengers' records garnered some acclaim from the rock press. However, the most interesting punk coming out of San Francisco was from an axis of bands who shared some members and more than a few musical ideas: Flipper, Negative Trend, The Sleepers and Toiling Midgets.

All these bands fused the spirit of experimentalism of the original CBGBs bands and UK post-punk outfits with the more aggressive approach favored by the new breed of punk bands popping up all over the U.S. None received much attention nationally except for Flipper, who toured a bit and got some posthumous recognition when Kurt Cobain sported their t-shirt of Saturday Night Live. Still, Negative Trend had their sole release, a 4 song EP, reissued by Henry Rollins and the Sleepers had a complete discography released in the mid-90s (which is out of print but available cheap). The only one of the bunch whose best work remains buried is Toiling Midgets.

Featuring the unmistakable and inimitable vocals of the Sleepers' Ricky Williams, Toiling Midgets released their debut LP, Sea of Unrest, in 1982. It was reissued on CD briefly in 1994 but quickly fell out of print and is now extremely difficult to find. This is a shame as it's one of the finer slices of U.S. post-punk. The album features many of the sonic motifs of the Sleepers' material, which Jon Savage dubbed "the sound of the unconscious". In some ways, it actually sounds like more of a continuation of the sound of the Sleepers' brilliant debut EP than that band's more muted (if wonderful in its own way) album. As befits a band from San Francisco, Toiling Midgets achieve a nearly psychedelic grace though more in the psychological sense of the word than the musical one. Besides, you'd never mistake the band's pummeling rock for Haight-Ashbury flower power anyway. If you thought that Joy Division were at their best before they went into the studio with Martin Hannett, Sea of Unrest is the record for you.

Following the album's release, Williams quit and the band released a mostly instrumental album the following year before splitting up. They reformed in in 1989 with American Music Club's Mark Eitzel on vocals and released the album Son on Matador, 10 years after their debut. The band appears to be a semi-active concern at this point. There's what appears to be an official MySpace for your perusal.

Though it was reissued on CD, the following rip of Sea of Unrest comes from the original vinyl source as I don't have a copy of the CD. When and if I obtain one, I may replace these MP3s. I've tried my best to remove any surface noise from the recording while leaving the wanted noise of the music intact.