Not as hot as Tricia Helfer but...

...probably not as expensive either.

For a mere $175 dollars, you can buy your very own robot girlfriend. Made by the same people that brought you Sonic the Hedgehog and nearly as fuckable. (Thanks to Cooter for the link.)

1) From the talented creative team that brought you Scary Movie, Epic Movie, Date Movie and Meet the Spartans comes Disaster Movie. I debated whether or not to post the trailer but then I decided words simply couldn't do it justice. Warning: Not for the faint of heart, the comedically inclined or very sensitive Miley Cyrus fans.

SELTZER:
Only they're really at an abortion clinic! And we'll have Jamie-Lynn Spears there too! She's preggers! That's a thing, right?

You might think that's a bit tacky but please note that Lionsgate has chosen to release Disaster Movie on the anniversary of Hurricane Katrina.

2) I was watching VH1's I Love the New Millennium earlier tonight and it occurred to me that I know little to nothing about my current culture. Daughtry and Plain White Ts had big hits last year? I honestly had never heard those songs until tonight. I did know "Umbrella" though, so that's something. The show is scheduled to resume tomorrow night at 9 pm with the 2008 episode until approximately 9:30 at which point the universe will implode on itself.

3) To quote the Reverend Billy Childish, is it art or is it arse?

Watching Return of the Living Dead on IFC right now. I've seen it a few times before but I've never noticed before tonight that it contains what might be the greatest exchange in film history:

The Unblinking Ear Podcast: If This Be My Density

I haven't been updating this blog as often as I'd like. If you've picked up one of the 250 or so business cards promoting this blog that I've spread around the NYC area of late and you're wondering why I bothered to drop 50 bills getting them printed up when I'm not even posting regularly, well... I don't really have answer for you except to say that my life is constant battle between my ambition and my laziness.

However, I've still been putting together podcasts for your listening pleasure. It's quickly become my favorite hobby superseding trying to assemble the definitive Spiderman collection (in my head) and heckling Oliver Perez.

One day ambition will trump laziness and I'll figure out how to actually get this thing on iTunes. (One prior attempt was quickly aborted in a haze of head scratching with mouth agape.) Until then, you'll have to come to this startlingly content-free blog for all you Unblinking Ear Podcast needs.

Play or Download The Unblinking Ear Podcast
Links to this post
Posted by PB at 2:24 PM 1 comments

Some people seem to have the notion that I only post youtube clips as way to have content for this blog when I don't anything particularly interesting to say. This may well be true, but when something is this awesome who are you to judge?

For a band that never got around to officially releasing any recording during their lifetime, the Screamers sure seem to have made a lot of videos. And this was before MTV. There's another clip for "122 Hours of Fear" on youtube as well. These may well be outtakes from their aborted "video album" or their never completed Population One film, which, if I'm understanding it correctly, has a remarkably similar plot to I Am Legend. They have it over Will Smith in the tunes department though. Get jiggy with that!
Links to this post
Posted by PB at 12:07 AM 0 comments

The latest Unblinking Ear Podcast has been created, uploaded and is ready for your listening pleasure. I think it's my best one yet if I do say so myself. Though Podcast number 4 was pretty good as well. Unfortunately, it was only downloaded 7 times. 7 times!! That made me very sad. But perhaps not as sad as this guy: 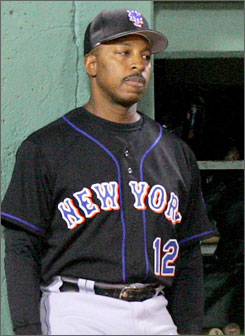 (Please note: I misstated the Girls' Robin Amos played with Jeff Fahey. I meant John Fahey. Please don't write me about this.)
Links to this post
Posted by PB at 1:40 PM 0 comments

"Paleontology for Dullards" (usually) rates records I've found in used LP bins by assigning them a cash value. For further explanation, please see my original post here. This time though, instead simply reviewing the record I'm giving the entire LP for free download! 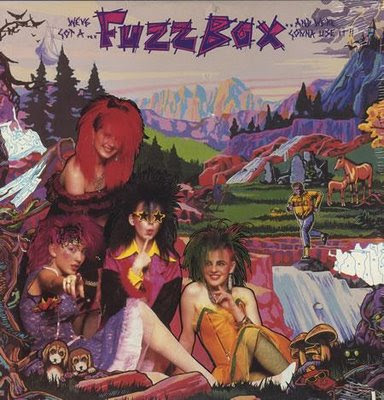 Fuzzbox We've Got a Fuzzbox and We're Gonna Use It!
Introduced to the world on the legendary C86 cassette, the all-female, most teen aged quartet known as We've Got a Fuzzbox and We're Gonna Use It truncated their name to simply Fuzzbox for their debut album. There's something that's very paradoxical about this record. Perhaps it's the band's amateurish but enthusiastic musicianship attempting to be wed to 80s pop expectations. Or maybe it's their legitimate independent spirit ("Pay less attention to the packaging and listen to the voice!" they instruct in "Preconceptions") paired with an image that seems to present them as punky teenage tarts. It all comes off like Kleenex trying to be Spice Girls. If that sounds appealing to you (and why wouldn't it?) and you can stomach their deconstruction of "Spirit in the Sky" (which is awful in a very cheeky way but still kind of awful) you'll definitely enjoy this platter. Songs like "Jackie," "You Got Me" and "Rules and Regulations" pop with punkish energy and bright harmonies, anticipating the sound of several Riot Grrrl outfits and even post-indie popsters like Love Is All. And, yes they do use that fuzzbox.
Price paid: $5 Rating: 100%

Download Fuzzbox We've Got a Fuzzbox and We're Gonna Use It!

Labels: Paleontology for Dullards, We've Got a Fuzzbox and We're Gonna Use It

Who cares about Friday the 13th?

The wait is over! I was unable to put together a podcast last week. After the public outcry these past two weeks I have finally delivered: The 4th Unblinking Ear Podcast. It's like The Kingdom of the Crystal Skull of podcasts except no CGI groundhogs. (Or were they prairie dogs? Or gophers? I don't know the difference.)

The second and third podcasts are still up as well. As is the first but I'm not going to link it because after relistening to it, I've concluded that it sounds terrible. I must apologize for such amateurism. I have to especially apologize to Thomas Function whose "A Long Walk" is filled with surface noise. Please go and listen to it on their myspace.

But enough about that. As they said in Kung Fu Panda, the past is gone, the future is... something, but the present is... um, a gift? I don't remember it verbatim but I assure you it was some very profound shit.

Play or Download The Unblinking Ear Podcast
Links to this post
Posted by PB at 11:04 AM 1 comments

Sometimes I do stupid things

Or rather I fail to do awesome things. After seeing this clip of them recording a session for Brian Turner's show on WFMU, I must conclude that not going to see the reunited Negative Approach a few weeks ago at Southpaw is surely one of the top ten worst decisions of my life (falling between accepting a regular DJ gig in Bay Ridge and buying dinner for that stripper). Holy cow!

Taken from WFMU's Beware of the Blog.
Links to this post
Posted by PB at 2:09 PM 0 comments

"The World is in the Turlet" by Ted Leo and the Pharmacists. (Or here if you don't have Real Player.) Last night Tom Scharpling, host of The Best Show on WFMU, invited his listeners to co-write a song with Mr Leo by calling up and suggesting lyrics. He then e-mailed the lyrics to Ted and Co. who whipped up this song in their studio, recorded it and sent an MP3 to Tom who played it on the air. This being the digital age, it's not quite the impressive feat that Warsaw Pakt's Needle Time was but it's a rockin' song regardless.

You can listen to the entire show and thus the whole songwriting process here.
Links to this post
Posted by PB at 10:56 AM 0 comments 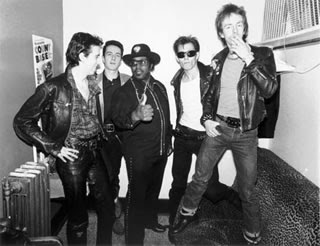 I've sometimes stated the (admittedly oversimplified) opinion that rock n roll has 3 fathers: Chuck Berry, Little Richard and Bo Diddley. We lost one of them today.

It usually drives me crazy when performer is retroactively labeled "Punk Rawk!" by folks whose idea of subversion is having tattoos and/or a weird haircut. (Johnny Cash is the most egregious example but I'm sure been applied to everyone from James Dean to Scrooge McDuck.) Thus, I'm only going to point out that while most of Diddley's obits have pointed out the enduring influence of the "Bo Diddley beat" (bomp! da-bomp! bomp! bomp! bomp!) few have noted that Diddley's understanding of the power of the "rhythm as lead" approach to electric guitar might be his greatest gift to the world.
Links to this post
Posted by PB at 6:02 PM 0 comments

My favorite song ever?

But does he know it's a Kinks cover?

Did anyone else notice the Pretenders' version of "Stop Your Sobbing" playing as Ryan Church walked to the plate in tonight's Mets vs Dodgers game? Was Shea Stadium's board mixer sending him a message about missing the past 10 or so games after suffering his second concussion of the year? Or is Ryan a closet new waver?

Church's usual batting song is Ozzy's "Crazy Train" which is certainly more pleasurable to hear than "Smooth" anytime Johan Santana does anything. Because his last name is Santana. Get it? Ugh. Couldn't they at least play "Oye Como Va?"

And now that we know the Pretenders are Shea-acceptable, I'd like to make an official request to SNY that they retroactively play "Kid" every time Gary Carter comes to the plate during a broadcast of Mets Classics.

Incidentally, Church proceeded to hit a two-run homer after hearing said tune. It's good luck, Ryan. Keep it!
Links to this post
Posted by PB at 10:43 PM 0 comments