20 years!!! So many Matador memories. Going to CBGBs for the first time to see a Matador New Music Seminar showcase (and still having the Bunny Brains 7" to prove it). The finale of the label's 10th anniversary show where Jon Spencer joined Yo La Tengo onstage for a rendition of "Slack Motherfucker." The time Robert Pollard bought beer for my underaged self at Sideshows by the Seashore on Coney Island and was inspired to write "The Official Ironmen Rally Song" as I vomited over the boardwalk. (Note: one of the preceding statements is untrue.)

Matador has sometimes been the object of ridicule among less than enlightened music snobs, partially for their occasional dalliances with evil major labels Atlantic and Capital. Yeah, fuck them for making a profit and attempting to expand the audience of their artists. Truth be told, a few labels in history have discographies as adventurous, diverse and high in quality as Matador, and even fewer have been able to do it for as long. I don't think it's hyperbole to state that modern music would be very different if not for the label's influence. We all owe them a debt of gratitude.

To commemorate the label's anniversary, my colleague at Pop Tarts Suck Toasted put together his list of the Top 20 Matador Albums of All-Time. I'm not going to argue with his choices (though, being the contentious type, I certainly could) but it inspire me to create my own Mata-list. I was considering making my own list of their best albums but that seemed a little predictable and dull. Does anyone really care if I think the SF Seals' Nowhere is better than Crooked Rain, Crooked Rain?

So instead, I thought I'd present to you
The Top 10 Matador Records You Don't Own:

10 Yo La Tengo "Shaker"
I'm sure many of you own a good chunk of the albums Yo La Tengo have released on Matador, and possibly a few EPs and rarities collections as well. This seven inch was their first release for the label, arriving just a couple of months before the Painful album, and has unfortunately gone unnoticed by a lot of YTL fans. It's simply one of the finest songs from a band with too many great songs to count: a dark and menacing psych-tinged rocker blend that gives one reason to think the band was paying close attention to the material coming out of New Zealand's Xpressway label at the time. The band apparently thought quite highly of the song as well. They selected it as the first track on their Prisoners of Love career retrospective. Plus, the flip, a cover of Richard Thompson's "For Shame of Doing Wrong," aint bad either.

9 Come Eleven:Eleven
Probably the best album in the long career of Thalida Zedek (Live Skull, Uzi, Dangerous Birds). Teaming with Chris Brokaw, a brilliant guitarist whose work remains one of the underground's best kept secrets, probably helped. Together their guitars interlocked to chart dark and bluesy sonic territory explored by few before or since, with the rhythm section providing rock solid foundation and Zedek's raspy wail cutting through the maelstrom. Their surprisingly reverent cover of the Rolling Stones' "I Got the Blues" gave some clue as to a blueprint, but originals like "Off to One Side," "Sad Eyes" and "Fast Piss Blues" display a style and power that's utterly individual and totally compelling.

8 Bettie Serveert Palomine
There was brief period where it looked like Bettie Serveert might get swept up the the whole "women in rock" trend of the mid 90s. You have to wonder if a lot of people though singer/guitarist Carol van Dijk was "Bettie." In any case, it wasn't to be as the masses decided they'd rather listen to the insight offered by Meredith Brooks and Tracy Bonham. It's unsurprising as BS was far too subtle for the mainstream. A quick listen to the near-hit "Tomboy" provides evidence of that. Pop music often gets its potency from persona, immediate identification with the singer as protagonist. While blessed with a clearly gifted vocalist, the tune derives its power from the ensemble playing of the whole group, with subtle shifts in dynamics providing tension and release to frame van Dijk's warm and evocative voice. The band matches this feat throughout much of Palomine, and if their subsequent released never quite topped it, few bands have made an album as memorable.

7 Babylon Dance Band Four On One
This one takes some explaining. The Babylon Dance Band were one of the Midwest's earliest post-punk bands. After releasing a handful of singles the band split up and some members went on to achieve a modicum of fame as Antietam. In the mid 90s, for whatever reason, the original band reunited and recorded this album. Perhaps, there was just a sense of unfinished business, as this disc is more vibrant and immediate than anything Antietam did (to my ears at least). The band's unique combination of angular post-punk and subtle Americana underpinnings is surprisingly warm and moving, with singer Chip Nold sounding like Pere Ubu's David Thomas returning from the brink and forced to deal with human concerns. Had the band recorded and released this during their original run, one suspects that they'd be regarded along with Mission of Burma, the Embarrassment and Pylon as one of the greatest post-punk outfits the US has ever produced.

6 Railroad Jerk One Track Mind
Bios for Railroad Jerk jokingly(?) described the band as "industrial folk" but that description isn't that far off. Actually, it suffices fairly well for RJ's unique stew of New York noise, roots music and who-knows-what-else. Try to imagine the Voidoids jamming with the Band and you're maybe halfway there. The Jon Spencer Blues Explosion took a similar approach to deconstructing trad rock but while Spencer and co. may have gotten the accolades and sizable following, the truth is they never made an album this good.

5 Love Of Diagrams Mosaic
A much more recent release than most of the albums on this list, Mosaic never garnered as much attention as it should have. Nearly every time I'd play a song from it at one of my DJ gigs, someone inquired about who it was. And why wouldn't they? Aussie trio Love of Diagrams displayed rare musical empathy as players, creating a rich and nuanced sound that most faux-orchestral 7-piece indie rock outfits couldn't hope to match. And they rocked. Hard.

4 La Peste s/t
In their original incarnation, Boston's La Peste released exactly one single, the thundering classic "Better Off Dead." Their self-titled Matador release collections that single, and handful of demos and a 1979 live broadcast on WBCN. Taken together, they paint a portrait of absolute titans of US punk rock, on par with the Pagans or the Germs. Their songs are melodic and memorable, containing undeniable hooks and played with blinding speed and fury. Matador has released a handful of reissues during their 20 years, but this one is arguably the most revelatory and essential.

3 Bassholes Long Way Blues 1996-1998
Not even their best album (that would be the double LP When My Blue Moon Turns Red Again, released the same year on In The Red), this collection of home recordings is nonetheless one of the finest records of the 90s. Lo-fi before (or after?) that could be considered a selling point, the Ohio band rips through absolutely savage garage blues stompers like "She Shimmy Wobble" and "Turpentine" and it's not hard to imagine that they've had immediate contact with the fellow who tuned Robert Johnson's guitar. Others cuts, like "Angel of Death" and "Cabooseman Blues," are more quiet and intimate, which makes their profound weirdness all the more disturbing. It's tempting to claim to that the Bassholes two-man blues set precedent for the success of the White Stripes, but the truth is, despite Jack White's attempt to turn himself into some kind of living kabuki doll, the Stripes never recorded anything as nearly bent as this.

1 & 2 Silkworm Firewater and Developer
I've already written extensively about my love for Silkworm so doing so again would probably be awfully redundant. However, I will point out that these two records may well be the most essential in a discography that was consistently excellent and your record collection is incomplete without them.
Links to this post
Posted by PB at 6:19 PM 11 comments

The Unblinking Ear Podcast: Timing Is Everything 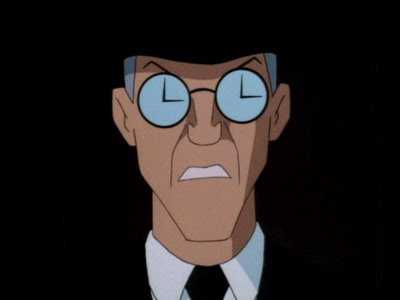 (Almost certainly not on Christopher Nolan's agenda for the Dark Knight sequel.)

For the first time since April, I've completed two podcasts within the same calendar month. This podcast comes just two weeks after my last one. (Well, 17 days, but who's counting?) Yes, I'm very proud of my newly punctual work ethic.

Of course, I haven't updated this blog with anything else in the month of July. I suppose I needed a bit of mental break. I know it would have been nice if altered you, dear reader, to this development. However, you can probably count on a more prolific August, as I've written some rough drafts here and there. Those should be polished up and ready to post in the near future. I'm a lot like Mr. Nolan in my need to perfect my ideas for public consumption. Sure, none of my ideas have grossed $533 million but I think you'd have to admit they're not a bad as nipples on the batsuit either.

The Unblinking Ear Podcast: Pump Up The Volume 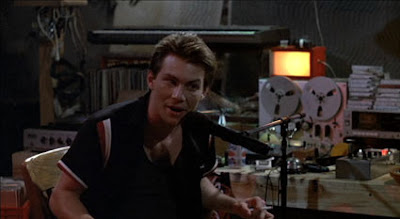 So my home computer finally died a couple of weeks ago. As much as I'd like to blame this for my less than prolific posting of late, it's not exactly the case. Luckily, my mother was nice enough to lend me her laptop until I can scrape up enough cash to buy a new computer. (Thanks, mom!) After good deal of struggling with various technical difficulties, mainly trying to get the damn mic input to turn off the voice recognition software, I am able to present you with a new podcast. I bet Happy Harry Hard-On never had these problems, even when he was being chased by the FCC. Then again, I never had Samantha Mathis write me an anonymous mash note. Now that would have made it all worth it.