Once a upon a time I would regularly run a feature in this digital pages called "Paleontology For Dullards," wherein I rated LPs I found in used bins with a percentage of what I paid for them. In other words, an esoteric title for a impenetrable concept.
In an effort to make this blog more user-friendly (and user-used), I've ditched this concept and it's place would like to introduce Used Bin Ubiquitous Bargains.
These are the LPs I frequently see fallowing in the used bins of record shops despite their quality and reliably low sticker price. They are the albums you can find easily, will only set you back 5 beans or less and are probably better than the whatever the hype machine is praising this week. All in all, they are ultimately both a wiser and more prudent purchase and better way to support your local vinyl vendor than most of the collector-bait that will be released on Record Store Day. MP3s from these albums will be posted as well, because I've learned that people like free songs more than reading.
For our inaugural UBUB (please pronounce this "you-bee you-bee" not "uhb uhb"), I cannot think of a more deserving candidate than Mr. Tommy Keene. 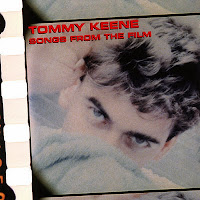 Keene was something of a critics darling back in the 80s. His pair of 1984 EPs, Back Again (Try) and Places That Are Gone, received glowing notices from big time R'n'R institutions Rolling Stone and The Village Voice. It's easy to hear why. Keene is an ace pop songwriter. A lot of what gets classified as power pop is too much pop and too little power, its practitioners favoring the slight and saccharine. That's not a problem for Keene. His melodies are seductive, never sticky-sweet. Even his most dulcet songs have the hint of a much fiercer, more primal animal. I've always imagined that when Westerberg fired Bob Stinson and tried to mold the Replacements into a less shambling, more professional unit, it was Keene's sound he was emulating. Indeed, Keene's records from this period sound like everything the post-Tim Mats should have been.
Keene's notoriety with critics led to a deal with Geffen Records where he debuted with 1986's Songs From The Film. Despite some now dated production (how high can we mix that gated snare?), the album remains one of the decade's best. Songs From The Film received a somewhat successful promotional push from Geffen, enough to get it to #148 in the Billboard charts. More importantly, it ensured that promo copies of the record have become a used bin staple for the past 20-plus years. Keene subsequently released an EP (Run Now) and another full length (Based On Happy Times) for Geffen before returning to the land of the independents, where he has happily remained since.
All of the records above can obtained without difficulty and on the cheap, with Songs From The Film being both the easiest to find and most highly recommended. Below is a sample of some of Keene's work: a song each from Back Again (Try), Places That Are Gone, Run Now and Based On Happy Times and two from Songs From The Film. Give them a listen and know that the next time you see a slab of vinyl with Keene's name on it in ye olde rekkid shoppe, you shouldn't hesitate.

I've never listened to Tommy Keene (despite Gerard always talking him up, also). Guess I better change that.

Ha, maybe I overstated this.

Westerberg and Keene have different songwriting styles. It's more that Keene's major label records were more artistically successful in fitting into the pop framework of the time than Westerberg's were. Neither of them had much commercial success, however.

Regardless, Keene's albums are very, very good. But I wouldn't want you to be disappointed that they're not the Great Lost Replacements Album.

No, you were right on target. I listened to those three songs, and they're exactly like the Replacements' post-Pleased To Meet Me output, only better.

My "whut whut" was more like, "why haven't I noticed this before?" than directed at you.

I have to hunt down some Tommy Keene now (which nowadays means Googling stupid power-pop blogs for downloads, and not actually visiting any record stores).