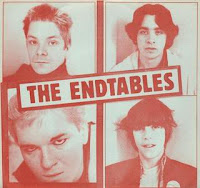 Someone at Drag City has apparently decided that they are going to be the keepers of the punk rock archives. Last year, the label released arguably the most revelatory reissue of the year: Death's For the Whole World to See. This year, they may have doubled that feat with today's release of a collection from Louisville, KY's Endtables.

Like Death, the Endtables released a lone seven-inch during their lifetime, in their case a 4-song EP. And like Death, it's unlikely that anyone beyond those close to the band heard it until one of its cuts was included on the compilation of rare punk singles Bloodstains Across the Midwest. (The legally dubious Bloodstains series numbers in the dozens and covers many regions but that's a story for another time.)

However, unlike Death, who reveled in Stooges/MC5/Blue Oyster Cult-derived hard rock, the Endtables were not classicists. Their guitar sound, courtesy of band founder Alex Durig, was tinny and jagged, not thick, heavy metal-style. His noisy leads and solos recall the controlled cacophony of early Greg Ginn. Vocalist Steve Rigot was an appealing non-singer, intoning in a manner that can only be described as "yelp-y." Occasional effects take his vocals even further from the realm of rock 'n' roll convention. His performing highlight has to be a "Shout"-styled "Hey-ey-ey-ey" during the song "Trick or Treat" that sounds like equal parts unenthused mental patient and injured animal.

Even the band's name gave notice they were not interested in being punk-by-the-numbers, whether you take it as acceptance of the everyday as opposed to clichéd rebellion or as a Duchamp-esque readymade. Or maybe it's just the thing you stub your toe on when you're not looking. The Endtables were one of the early figures of Louisville's nascent indie/punk scene. (See the compilation Bold Beginnings for a thorough overview.) Without too much difficulty, one could trace a line of inspiration backwards from later Louisville bands like Antietam, Squirrel Bait and Slint to the Endtables' atypical approach.

The Drag City self-titled collection complies the band's EP, a pair of studio cuts from the same sessions and half a dozen live tracks. It's not dissimilar from the artsy-but-not-too-fartsy punk of Dangerhouse-era Los Angeles. Ideas flowing in from New York, Cleveland and the UK galvanized many into picking up instruments and doing their own thing, resulting in some of the most exciting rock music ever made. The Endtables were as fine an example of any of this thrilling moment in music history, just before hardcore orthodoxy set in. The tape fuck-up, we've-already-started-thanks-for-joining-us intro to "Process of Elimination" might be the best beginning to a punk song ever and has long been a favorite in my household. Now it, along with the rest of the Endtables output, can be in yours as well.
Posted by PB at 8:00 AM

This sounds awesome. So picking it up now. How does Drag City keep finding these gems?