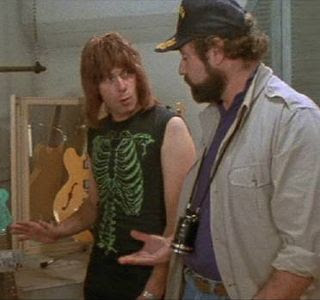 (Above: Jeff Beck explains to filmmaker Marty DiBergi that these go to 11.)
Metallica, Run DMC and Jeff Beck lead the latest group of inductees to the Rock and Roll Hall of Fame. (Also: Bobby Womack, Little Anthony & the Imperials and Wanda Jackson.) Once again snubbed are the Stooges, who are turning into the Bert Blyleven of the Rock Hall.

The inclusion of Run DMC will probably continue the debate from last year, when Grandmaster Flash and the Furious Five were inducted, over whether hip hop groups belong in the "rock and roll" hall of fame. It doesn't really matter since they clearly are being inducted. What's marginally more interesting now is what hip hop acts will be included in the future. I can make an educated guess based their criteria for rock acts: artists who sold well and had at least a modicum of critical respect. LL Cool J? Possibly. MC Hammer? Definitely not. Public Enemy is probably a shoe-in but the whole Native Tongues posse probably won't make it. Dr Dre will make it in though NWA may not. Puffy? Let's just wait and see on that one.

Jeff Beck is already a (well-deserved) part of the rock hall as a member of the Yardbirds. Honestly though, if the Yardbirds are the standard can anyone say with a straight face that his solo work deserves equal recognition?

And that brings us to Lars and co. Question: being that the biggest metal band ever is named "Metallica," does that prove that it really doesn't matter at all what you name your metal band? No word if the induction will bring on a new round of litigation from Excel.
Posted by PB at 5:28 PM