This week, the long-deleted curio of punk rock cinema Ladies and Gentlemen, the Fabulous Stains was released on DVD, the first time it's been available in any format since it's original theatrical run. I was lucky enough to catch it quite accidentally on late night cable many years ago and I can tell you without reservation that it contains some the best acting in the respective careers of both Diane Lane and Steve Jones. I took a look at it on Amazon and noticed something strange: 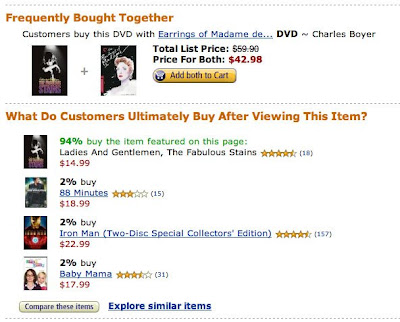 Now do you think that some are contemplating "I was thinking of getting this obscure punk rock film but instead I'm going to get this hack-y already forgotten thriller starring Al Pacino. I would just go to the theater to see Righteous Kill, Pacino's all new hack-y thriller, but I'm not really the type to leave the house?" I will admit, however, that I could see a correlation between admiring both scandalously clad punk girls and Tina Fey.

You may have noticed that it seems a lot of people bought Fabulous Stains along with Earrings of Madame de... Click on that film's Amazon page will tell you the 4% of those who viewed that item ultimately bought Road House, which is, unfortunately, not the Patrick Swayze movie. 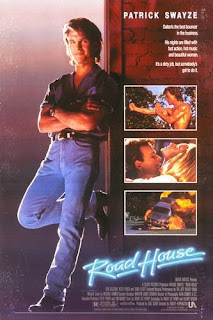 (Ed. note- If anyone who wants to have a Fabulous Stains/Swayze-Road House double feature, please drop me a line.)
Posted by PB at 4:42 PM