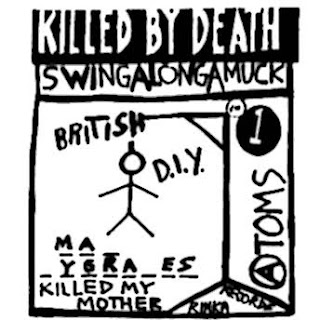 Though I'd like to think that everyone who reads this blog is on the exact same wave-length as me, I feel that it would probably be best if I explained both halves of the subtitle of this post.
Killed By Death is series of bootlegs collecting extremely rare vintage punk singles, mirroring the model used by the Pebbles series for rare 60s garage rock. The debut volume appeared in 1989 and while it wasn't the first collection of rare late 70s/early 80s punk rock, it was the first of it's kind to spawn sequels. The first four were were put together by the same compiler and were hugely popular with punk collectors. Despite making household names out of the likes of Mad Virgins and Ebenezer and the Bludgeons, said compiler eventually dropped the project.
A few years later, another enterprising soul realized that since the series was quasi-legit (at best) bootlegs, the original complier had no rights to the name Killed By Death. So, this soul put together his own collection of rare punk and slapped Killed by Death 5 on the front. Thus, the floodgates opened and soon every punk collector with a few elusive singles in his collection was putting out a Killed By Death of his own, numerical consistency and quality control be damned. For the inside scoop on this phenomenon from one of the many bootlegers, click here.
The series peaked in the mid-90s, with over 20 seperate editions of KBD (not to mention numerous other comps with different monikers) coming out between 1995 and 1998 alone. Its impact on the garage punk scene of the mid 90s (soon to memorialized in Eric Davidson's We Never Learn) cannot be overstated. Eventually, the series petered out as the law of diminishing returns set in. There were only so many insanely-awesome, insanely-rare punk rock stompers to be unearthed.
In 1998, one compiler decided to go a slightly different route. While the well was running dry on punk singles, its artier but just as amateurish offshoot, D.I.Y. ("do-it-yourself"), was all but undocumented. So this compiler assembled this collection and renumerated the series at "Vol. 1," joking there was no way to tell which volume of the Killed By Death series was "next," so he just decided to start over again.
As for what D.I.Y. is... well, a less than elucidatory shorthand is that it's not that dissimilar to "post-punk," as that term is conventionally understood. It's actually a subset of post-punk though it tends to be more ramshackle and is much less likely to have had any kind of corporate backing than other varieties. For that matter, it's less likely to have had any kind of music industry connection at all. I'll leave it to Chuck Warner, the creator of the Messthetics series, to explain much more conclusively:

Messthetics is about something truly important and vital that really DID happen after the punters took up the cry of "punk is dead" (And no, we don't mean Joy Division.) And in its way, DIY was just as revolutionary as punk.

However proletarian punk was at the musician level (say, 70% in the U.K., 2% in the U.S.), it became business-as-usual almost instantly in terms of manufacturing and marketing. Sure, Stiff and Radar stayed independent for a couple of years, but even before the Sex Pistols got to EMI or A&M, they were cutting acetates at Abbey Road.

The Desperate Bicycles set the initial standard for the Do It Yourself alternative. To cut mastering costs in half, they pressed the same two songs on either side of their first two singles (August '77 and Feb. '78), and they recorded in one take. Younger fans may be surprised at their printed sleeves and labels [one side only, natch], but in 1978, both letter-press and offset printing were cheaper than photocopying, even in quantities of a couple hundred (although a surprising number of UK DIY 45s came in editions of 1000 or more). But the true rallying cry of DIY came from the 'Bicycles' "The Medium Was Tedium:" "It was easy. It was cheap. Go and do it!"

While punk fizzled in '78 in a wave of tunelessness and gobbing, more timid bands either plugged away at over-hyped (and again, tuneless) skinny-tie pop [Pleasers, Boyfriends] or diluted whatever other fresh ideas they might have had with ever-more expensive gear and slicker production values. So meanwhile John Peel and others were only too happy to play and promote the rising tide of self-produced, home-made vinyl. (The U.K. listings for Volume were chiefly compiled from Mr. Peel's archives: if a DIY record is not listed, chances are good that the band never sent him one.) But back to budgetary matters:

Bands were more likely to list their production costs than to list their band-members' names. They were highly competitive about the former...and quite egalitarian about the latter, which were frequently given only as indeterminate three-letter grunts: Gez, Baz, Kaz, Daz, Loz, Tag, Jaf, Nik, Nag, etc. (This annoying habit became a veritable art form in the Oi era, of course.)

A great deal of the DIY "sound" is characterized by wheezy unreliable keyboards. Since they'd gone utterly out of fashion and/or having been superceded by newer electronics, Voxx Continentals and Rolands and Farfisas and Fender-Rhodeses and even a few Hammonds had become as cheap or cheaper than guitars in 1978. And every crappy studio still had a rattly old piano in the corner. Other common non-punk elements are hippie-psychedelic guitar chops, and bass-lines lifted rather directly from JJ Burnel of the Stranglers (an underappreciated genius of some magnitude). Oh yeah, and hardly anyone ever worried about their tunings or musicianship...

Messthetics posits a DIY-centric universe, so this series is inclusive, not exclusive. For instance, after the DIY sound had been around for a while, certain more established or commercially successful bands began to record songs that were musically indistinguishable from the real thing. They're here. Likewise, a bunch of DIY bands recorded straight-ahead punk songs (that regularly turn up on KBD-style comps). And some of those are here, too.

This KBD volume is possibly the first attempt to contextualize this movement, predating Chuck's Messthetics. It's by no means definitive. D.I.Y. stalwarts Desperate Bicycles, the Homosexuals and early Scritti Politti are not present. Still, it's a fine introduction, collecting many excellent sides from UK D.I.Y. bands (and a ringer from New Zealand) released between 1978 and 1981. It's also one of the few Killed By Deaths not already uploaded on the web by somebody which is why I'm sharing it with you all now.
Below are a couple of representative tracks and a link to download the full album. If you like what you hear, I highly recommend you purchase one (or several) of the Messthetics comps. You can also check out the frequently-Googled post I made many moons ago on the Four Plugs, whose "Biking Girl" is #12 on an entrepreneurial gentleman's list of the top 100 D.I.Y. singles. If you're interested in the Killed By Death series as a whole, there are some fairly comprehensive lists of it and other like-minded collections like Bloodstains available online. Caveat emptor: later volumes of the series are rather dire. Stick with the first four and proceed with caution from there.
Download Killed By Death Vol.1: Swingalongamuck - British D.I.Y.
Posted by PB at 6:22 PM

Labels: DIY, Killed By Death, Out of Print Digital Relics

I hereby beg for a FLAC rip. Please? Pretty please?

Sorry, sir (or madam). The software I used to create the MP3s from vinyl is unable to create FLAC files. You'll just have to deal with the free content I've provided as is.

I can not explain how cool and geeked out I was over this post. I had no idea the Killed By Death series was unoffical and bootlegs. Even more so, you were kind enough to post a whole LP of one, on the British era post-punk scene too. Plus a small history of the series and I found out you like the Messthetic series as much as I do. To top it all off, a link to all the out of print Desperite Bicycles tunes on mp3. You sir, rock.

P.S. Are you planing to release a Killed By Death Lp anytime soon?

Thanks for the kind words, David.

There are certainly no plans for me to release a KBD LP. As I said the whole phenomenon petered out in the late 90s. I don't think there's been a new KBD comp since like 2000. This is because a) the internet more or less made them obsolete and b) they were getting pretty sucky anyway.

Maybe somebody will compile a sort of "Best of the Worst," collecting the few gems on the later volumes of KBD. Maybe that will be me. In the meantime you can listen to any of the three all punk podcasts I've made, which are more or less in the KBD spirit, though certainly not as committed to rarity as a priority.