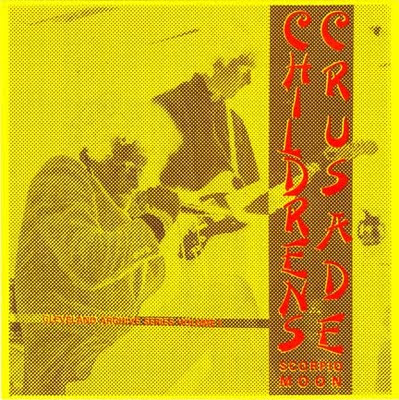 Doug Gillard has accumulated quite the resumé as the guitarist for Death of Samantha, Cobra Verde, Gem, Guided By Voices and many other artists. He's also the author of one of your favorite songs. (That would be GBV's "I Am a Tree.") Before any of those bands, the 19-year old Gillard formed Children's Crusade with Starvation Army's Fraser Sims. With Sims on vocals and Gillard playing all instruments, the pair recorded an 8-song cassette-only release in 1984. By the time of their second recording session the following year, the band has been fleshed out into a full lineup, but Gillard preferred to once again handle all the instruments himself. The session went unreleased at the time as Gillard joined Death of Samantha and the group faded into non-existence.

Five years later, Scat Records issued the cuts from the final Children's Crusade session as the inaugural release in their "Cleveland Archive Series." Upon listening to them, it's hard to imagine that songs as outstanding as these sat unreleased for years. The A-side, "Blue Venus Aflame," is a six-and-a-half minute epic, sounding something like rougher-edged Roxy Music. (Not a bad thing at all.) The two cuts on the flip are also remarkable: the anthemic straight ahead rock of "Your Time Is Through" and the weird Gang of Four/Captain Beefheart amalgam of "St. Jack's Bible." Though limited to only 1500 copies, the seven inch is still available from Scat and will only set you back 3 bucks.

I momentarily stopped listening to Off With Their Heads so that I could check this out. Pretty awesome.

If I wasn't from Pittsburgh, I would love Cleveland (even a lovely wife from there can't change what is a fundamental cats v. dogs situation)... If for no other reason than they might have the best truly local music scene ever. Maybe not anymore--although I like Homostupids well enough--but if you go back to like the Electric Eels and work your way up 20-plus years to the New Bomb Turks and such, you've got an insane track record of quality. Set aside the obvious for a moment (Ubu, D Boys, Bone Thugs) and you've still got the Easter Monkeys, Prisonshake, Mirrors, Styrenes, Pagans, Bill Fox/Mice. Shocking. Even 9 Shocks from a few years back kickin' the seriously crucial hradcore. Not having a good football team is a small price to pay for such an unbeatable underground legacy. Columbus can obviously throw down as well, but still....

Paul, I'll see if I can locate my original tape of Doug Gillard covering Roxy Music, Eno, and the Beach Boys. BTW This is a sick as death single. I'll have to dig it up.

Ha ha Nate - why everyone here has to drag in the rivalry between the two cities is so typical. Okay, so yes, you're town has better sports team - but what does that have to do with Cleveland? My husband and I (from Cleveland) have been living here for 6 years and while we enjoy the landscape and a few other cool things, we can care less about the sports teams. The whole sports mentality I think holds the city back from progressing to what can be a truly fantastic town. I'm not saying no sports - but when it's always the center of everything - including the nightly news - it's a bit much. Pittsburgh has a lot going for it over Cleveland - besides their sports teams...but the people here need to get their head's out of their tv sets and look around more. Sorry for the rant - it's a Cleveland thing I guess.