Up With Negativity: Vivian Girls and Meth Teeth

Eight months since the new administration took office, I guess we've given up on this "hope" jive. At least that's what one might infer from the very similar titles of two recent releases: Vivian Girls Everything Goes Wrong and Meth Teeth's Everything Went Wrong. 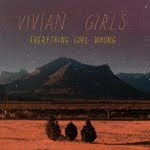 I've very publicly defended Vivian Girls in this space before but I couldn't help but wonder if their sophomore full length, which follows their self-titled debut album by less than 18 months, would be anything worthwhile. A number of scenarios for any band in their position could have yielded disastrous results.

Under the pressure of sudden notoriety, a band might feel the need to "make a statement" and wind up drowning in ambition. Forcing yourself into new sonic territory in which you're not comfortable can possibly yield interesting results, but often it means you're just not playing to your strengths.

The Vivian Girls could also go the route of simply rehashing their debut. There's nothing necessarily wrong with that but it would augur for the law of diminishing returns setting in sooner rather than later. Future releases might be considered wholly redundant.

Finally, any band for whom amateurism is intrinsic to their appeal might be rendered inert by going "pro." Genuine enthusiasm goes a long way in rock music. Better execution means greater clarity of a band's ideas but could wind up exposing those ideas as not being very good in the first place. Just consider all the hardcore bands who got some chops and started playing shitty metal. Hell, consider Pavement after they kicked out Gary Young.

Fortunately, the Vivian Girls manage to avoid the above missteps. Everything Goes Wrong is neither a huge departure from nor total retread of their debut. Rather, it plays as though the band's moderate success has granted them validation. Their obvious gift for melody remains unabated as they grow more assured and confident, freely adding new wrinkles to their sound.

Moments on the album are both more sophisticated ("Can't Get Over You") and harder rocking ("The End," which recalls their heroes, The Wipers) than anything on the debut. The band's songwriting is tighter and and, while no one is going to mistake them for math rock, their playing has gotten more assertive. They even engage in a bit of Velvets-style stretching out on "Out For The Sun." This more varied approach is mildly obscured by the samey production, which also makes the record feel a bit overlong. At one and a half times the length of the debut, this might have been inevitable.

I've never considered the Vivian Girls to be novices bashing away without a clue but there's no denying that a lack self-consciousness and pretension is part of their appeal. It seems fitting that any sonic expansion they've made on Everything Goes Wrong feels unforced, and that is key to the album's success. 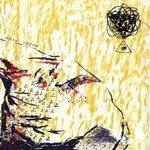 Meth Teeth released one of my favorite records of last year, the Bus Rides 7" EP. I've been looking forward to their debut full length tremendously and it does not disappoint. The Portland band offers a noisy, aggressive take on psych-tinged folk rock. In an earlier review, I compared Meth Teeth's songs to the to the quiet, ominous psychedelia of famous acid casualties Skip Spence and Syd Barrett. Those are fairly apt comparisons but neither were ever so brazen. Much of Everything Went Wrong sounds as though internal demons have been driven outward and thrashed about. The band is capable of more harmonious, less foreboding moments as well. The album's opener, "Never Been To Church," sounds like the jangle of the Byrds if Crosby's connection had given them weed laced with roach killer.

I suspect that the general reaction to the release will be something along the lines of "Another lo-fi record of Woodsist. Ho Hum." It's understandable that one might suffer from lo-fi malaise at this point. However, Meth Teeth stand above the fray and Everything Went Wrong is worthy of your attention.
Posted by PB at 12:47 AM

Ironic I was listening to a playlist on shuffle and the 1st pink floyd record was playing and then I heard some of the meth teeth stuff a friend turned me onto. I agree there is some similar energy there.

Anonymous said...
This comment has been removed by a blog administrator.
8:12 AM