MJ at the Crossroads 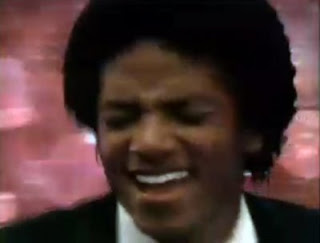 "It was totally unfair that it didn't get Record of the Year and it can never happen again." -Michael Jackson, disappointed that Off The Wall only received one Grammy.

On the night of February 27th, 1980, a disheartened Michael Jackson returned to his home, his Best Male R&B Vocal Performance Grammy in his hand. It was a consolation prize, he thought. Any award with that many qualifiers in its name is barely an award at all.

He walked in the door and the beast was waiting for him.

"Hello, Michael. I know you're upset. I would be too if I were you. It was unfair. 'What A Fool Believes' as record of the year? It's a joke. You were much more deserving, especially after all you've been through.

But I can help you, Michael. What if I told you that your next album could not only sweep the Grammys but be the biggest selling album of all-time? And you, Michael, would be the biggest pop star in the world, adored by not just millions, but hundreds of millions, perhaps even billions. And the children, Michael. They would love you more than anyone.

You wouldn't have to answer to anyone, Michael. No one could tell you what to do. Not the press. Not the record label. Not your family, Michael. All of those who tried to keep down in the past would come to you begging for your help, begging for just the lightest caress from your Midas touch. They would be yours to appease or deny. You'd be an entity of your own, untouchable.

It could all be yours, Michael. Let's make deal."

Michael made the deal and everything the beast promised came true. Thriller and its many hits, including the title track with its occult overtones, were a pop music phenomenon like the world had never seen.

But soon, the beast came for Michael's soul.

His appearance also began to betray his African-American heritage. His nose became skinnier and his skin progressive paler. Eventually, he just didn't cease to resemble a soul brother, but barely looked human at all.

His essence corrupted, Michael developed a fascination with young children. Proximity to their innocence helped him regain a small bit of what he had lost. He attempted to express his affection for these children in a manner his eroding moral compass thought perfectly appropriate.

Soon, people began saying the most awful things about him. He was still known throughout the world but no longer as a superstar. At best, he was a punchline from which the most hackneyed comedian could elicit a laugh. At worst, he was a monster.

Michael did his best to persevere. Thirty years after his deal with the beast, Michael had hoped to tour again, performing his music in front of a smaller but still sizable following of fans who continued to be devoted to him. It was all he had left. As the only possible source of pleasure remaining in Michael's life, the beast took him to hell before the tour could begin.

The timing was perfect for the beast. He had a busy weekend ahead of him fulfilling the terms of his deal with Michael Bay.
Posted by PB at 11:03 AM

I love you for this.

I thought you already loved me.