Guided By Voices: Selections from Singles and EPs, 1993-95 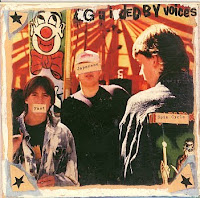 This is a re-post of blog entry from August of last year. I've never done a re-post before but it seems to be pertinent time to update this one for a couple of reasons:
1. The "classic" GBV lineup which this post covers is reuniting for Matador 21 this weekend in Las Vegas with more dates to come.
2. The fine folks at Decrepit Tapes just put together their own playlist of recordings from GBV's 1992-96 lineup. While theirs is a more extensive overview (covering a slightly larger timeframe and albums while this is strictly non-LP), I thought this would make a nice companion piece, despite an overlap of a few songs.
3. Most importantly, the original divShare playlist has crapped out for whatever reason, rendering most of the songs unplayable. I've re-uploaded to fix this.
Enjoy!
As I was putting together my little demi-best of Matador list below, a couple of Guided By Voices 7" releases just missed the cut. During their "lo-fi era," GBV released a steady stream of 7 inches between albums, often containing something like 6 or 7 songs.

One could make the argument that these releases prepped the underground community for the breakthrough of Bee Thousand in a way their prior albums didn't. Guided By Voices may seem like fairly typical indie fare by today's standards but then their sloppy and extremely lo-fi prog-pop was fairly challenging. Indie/punk types may abhor the slick and professional, but GBV seemed to be openly mocking the concept of quality control. New listeners who didn't have the patience or intrepidity to sit through the uneven Vampire on Titus could surely endure a quick spin of a 7" EP and hear the handful of brilliant songs each invariably contained.

These smaller samples were much more digestible examples of the GBV aesthetic: rough fidelity, nonsensical lyrics, brevity, insanely catchy melodies. Of course, there was also the band's, shall we say, idiosyncratic method of choosing songs for release. Wheat and chaff were mixing freely. However, further listens might reveal that Guided By Voices' "throwaway" tunes weren't just filler, but rewarding in their own right. The band may have seemed impenetrable initially, but Pollard and his cohorts' twisted logic soon became readily apparent.

There has yet to be a thorough compilation of all of GBV's 7" material despite that a) they're a band inclined to clear vaults and compile collections and b) those records contained some of their signature songs. The latter assertion is somewhat indisputable as "Shocker In Gloomtown" from the Grand Hour EP and the superior 7" version of "Game of Pricks" are both included on the band's best of collection, Human Amusements at Hourly Rates.

The 15 songs below have been cherry-picked from various GBV 7"s from 1993 to 1995. That Robert Pollard is prolific is no secret but consider this: any artist releasing a batch of songs this strong over a two to three year span would be justly praised as a remarkable talent. Pollard did it while releasing three equally potent full lengths.

Labels: Guided By Voices, This Moment in Slack History