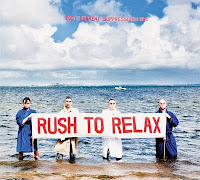 Let's write a little speculative fiction, shall we? Let's say that John William Cummings was born with no hands, thus could not innovate the blitzkrieg downstroke. And let's say that Malcolm McLaren decided that he had an even better idea of how to sell clothes than putting together a rock band. If these things happened, does punk rock, as we know it, still happen?

Maybe it does in Australia. First wave Aussie-punk archetypes the Saints and Radio Birdman were performing as early as 1974, concurrent with the earliest CBGBs bands. They released their respective debuts back in 1976, both pre-dating vinyl from any UK punk group.

However, it's arguable that what the Saints, Birdman and their children were doing wasn't especially different from what was already going on in the rock scene down under. Bands like Coloured Balls and AC/DC weren't the bloated, in-need-of-shunting dinosaurs that Pink Floyd and Led Zep were. They were making some of the most vital, alive rock music of the mid-70s. Unlike in the UK and US, this new generation of Aussie rockers were more or less continuing in a straight line from their forebears rather than starting a revolution. Before "punk" existed, they had already figured out hardcore rock n roll in the land of Oz: keep it simple and dirty, attack with brute force and don't forget to swing. Ugly Things' Johan Kugelberg calls it "grillfat rock." I'm not sure exactly what this implies other than it probably goes best with lager.

Melbourne's Eddy Current Suppression Ring are firmly in the above tradition. Their third album Rush To Relax comes out today in US through the reliably fantastic Goner label. Needless to say it's a more than worthy purchase for anyone who likes their rock music stripped down and nasty.

In my post on 2008's best records, I wrote of ECSR's prior album, Primary Colours:

Sometimes it's hard to explain exactly why a band stands above the pack. Eddy Current Suppression Ring plays garage punk, plain and simple and lean and mean. There's no angle. No bells and whistles. Nothing to make blogger/critic/hype machine-types to perk up their ears and say "Oh, isn't that interesting!" So what makes ECSR better than the rest? It's that's indefinable quality called... I don't know... talent?

Well, whatever it is, the conclusion is that this is one of the finer rock music outfits around right now. If you're looking elsewhere for THE album to pick up this week, you're a real chump.
Posted by PB at 2:00 PM

I'm really hoping this is gonna be great-- I liked the s/t LP better than "Primary Colours"...

It's been available overseas and in full as a digital download from the UK label for a couple of months now, but I didn't pull the trigger on that one, figuring I'd wait for it to come out on Goner...