...Without Having to Elbow Your Way Through a Bunch of Music Biz Wastes of Space. 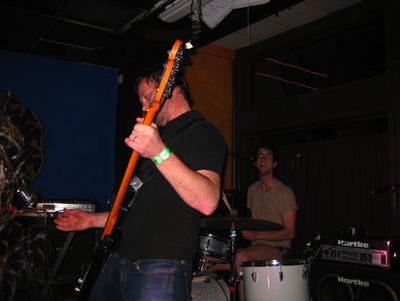 If you're like me and you couldn't make it to South by Southwest (or if you were in Austin and you're just a clueless putz), it would seem you missed a hell of a show. Fortunately, the world's greatest radio station broadcast the event as it happened. It's now available on their archives, so everyone who missed out can now listen to hot live rock action from Mexico's awesome XYX and the new project from former Drive Like Jehu/Hot Snakes frontman Rick Froberg, the Obits. This archived performance also seems to be the only place on the internet you can hear Mayyors, who will soon be the band everyone is going claim they were hyping first, so you should probably get on that. (Chunklet's Henry Owings on Mayyors: "No MySpace. No Facebook. No Twitter. No tour. No interviews. No nothing. In 2009, their marketing tactics are absolutely genius.")

Honestly, if you didn't contribute to WFMU's recent fund raising marathon, you don't deserve to listen to this. Even though it's late, why don't you do that now and ease your guilty conscience?
Posted by PB at 2:30 PM