As unlikely as it seems, vinyl is not the only sort after medium for rare music. An increasing number of CDs are falling out-of-print and fetching high prices on eBay and Amazon. Sure, you can probably find just about anything via Soulseek or some other file sharing service but I thought I'd make things easy for you. 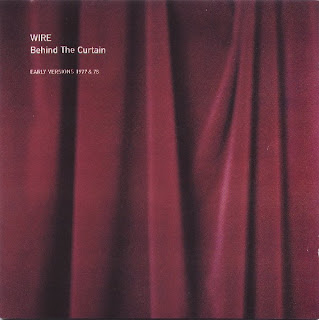 Wire Behind the Curtain (Early Versions 1977 & 78)
Due to adult-type obligations, I'm unfortunately going to have to miss tonight's WFMU-sponsored Wire/Times New Viking show. However, I thought it was still a fine opportunity to share with any other Wire fanatics this 1995 collection of live and demo material from the group's very earliest days. I believe the first six tracks are from the same show that produced their cuts on the The Roxy London WC2 compilation. Once you hear their take on JJ Cale's "After Midnight" you'll... well I was going to say something about Eric Clapton but chances are if you like Wire you already know he's awful. The remaining cuts are all demos some of which are of otherwise unreleased songs. Of special interest are the last 10 cuts which are songs that later ended up on 154. If you've ever considered the arrangements on that album to be somewhat fussy, it's stunning to hear these songs in more visceral, stripped-down form. It wouldn't necessarily say these versions are superior but if your favor the straight ahead minimalist impact of Pink Flag to later abstractions, you might find them preferable.

Pretty self aware, I suppose. Behind the Curtain is a neat little window into the group's process. Not the best place for neophytes to start by a long shot but if you're like me and Justine Frischmann you'll find it a fascinating document.