Lost Bands of the Early 21st Century: The Tokeleys 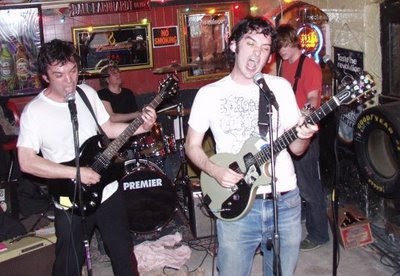 (Photo courtesy of What a Way to Die)
In the post-Strokes signing frenzy of the early aughts, it seemed like there were thousands of bands in the New York area trying to get noticed. A lot of them fit pretty squarely into one of two revivalist styles: garage rock and post-punk. It sometimes seemed like every band was either aping the stiff angularity of a few select examples from the early Rough Trade roster or coping riffs from the Nuggets box sets. It was all entertaining enough initially but the law of diminishing returns quickly took effect. Some of these bands rode flavor of the month status to minor fame and fortune. Most have disappeared and are justly forgotten.

The Tokeleys can be accurated cited one of the forgotten, though in their case this is rather unfortunate. During their time as an active band they didn't get a tenth of recognition of, say, the Liars. This is likely because A) they didn't fit in with garage or post-punk crowds and there's nothing like being part of a tend to get one press and B) they didn't release any records aside from a pair of demos. Though heard by relatively few, those demos, the 8-song Nercopolitan Opera House and 4-song Sons of Horus, were mighty impressive. The Tokeleys easily matched the best of the garage bands for stomping rock action though their songs had genuinely weird dynamics, various elements coming in at sharp and unexpected angles. There was also singer/guitarist John Hogan's startlingly original lyrical content, obsessing over subjects like dead civilizations and extinct animals with wit and flair. Bands like the Yeah Yeah Yeahs may have thought they were skewing traditional pop topics like love and romance but Hogan and co. just sidestepped them entirely.

The Tokeleys were also quite the forceful live act, usually climaxing their shows with the magnificent "Megafauna" and its singalong chat of "We won't go back into the cave!" This song was recorded for what would have been the band's debut album. Regrettably, said album seems be lost forever, it's digitized bits moved into the recycle bin by a now defunct studio. The good news is that WFMU's Free Music Archive now has an entire Tokeleys live set streaming online and available for download.The session, recorded for the Cherry Blossom Clinic with Terre T, was previously available the 'FMU playlist archives but only as streaming audio for Real Player. Now it's available in MP3s of each individual track, so you can finally load "Megafauna" and several other songs not included on either demo on to your iPod. Oh, and if you don't have those demos already, you can download them here.

The Tokeleys split when John Hogan moved to California to get his master's degree though he still makes music in Ponce De Leon and Future America, the latter of which also features Tokeleys' bassist Dave Reich. They're also collaborating on a "musical audio-play miniseries" called Heretics. Drummer Evan "Funk" Davies is now best known as David Letterman to Tom Scharpling's Johnny Carson. Guitarist (and brother to John) Michael Hogan is now a big time journalist, interviewing the likes of Shia LeBeouf for Vanity Fair, which may well make him the most successful person to whom I've ever spoken.

So head on over to those archives and give the Tokeleys a listen. You can you were hip to them before they get the posthumous recognition ala Simply Saucer or the Monks they so richly deserve.
Posted by PB at 11:31 AM

Great to see this here. Thanks for the awesome writeup, Paul.

All of the download links are down except the megaupload one and the zip requires an unknown password for one of the EPs. Thanks for sharing it though. I've been waiting far too long for this. What's the password?